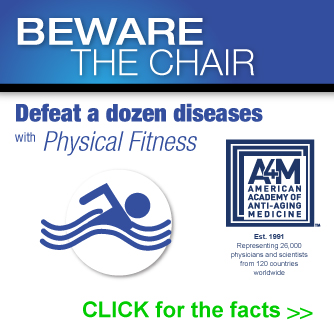 Sitting – and generally leading a sedentary lifestyle, may raise your risks of developing chronic diseases, as well as potentially shorten your lifespan. Michael Jensen, from the Mayo Clinic (Minnesota, USA), and colleagues submit that too much sitting may be as bad for a person’s health as smoking. The researchers designed a program of exercise counseling and accelerometer feedback, to ascertain the activity levels in older people. The study enrolled 49 men and women, ages 65-95 years, who were ambulatory but sedentary and overweight, for a randomized controlled crossover trial lasting one year. The resulting data revealed that “an increase in activity level was associated with a decline in % body fat,” leading the investigators to urge that: “Increasing activity levels benefits older patients.” [Thompson WG, Kuhle CL, Koepp GA, McCrady-Spitzer SK, Levine JA. “’Go4Life’ exercise counseling, accelerometer feedback, and activity levels in older people.” Arch Gerontol Geriatr. 2014 May-Jun;58(3):314-9.]

Why is prolonged sitting bad for your health? Richard R. Rosenkranz, from Kansas State University (Kansas, USA), and colleagues studied data collected on 194,545 men and women, ages 45 to 106, who were enrolled in Australia’s 45 and Up Study. Positing that prolonged sitting reduces muscle contractions and shuts off the activity of lipoprotein lipase (LPL), which helps to process fat into energy, these study authors write that their data adds to the evidence to support efforts “to increase [physical activity] and decrease sitting time toward the achievement of better population health and the pursuit of successful aging. “ Among postmenopausal women, Rebecca Seguin, from Cornell University (New York, USA), and colleagues found that those with the highest amounts of sedentary time – defined as sitting and resting, excluding sleeping – died earlier than their most active peers. Further, the researchers found that women with more than 11 hours of daily sedentary time faced a 12% increase in all- cause premature mortality, as compared with the most energetic group – those with four hours or less of inactivity. The sedentary group also upped their odds for death due to cardiovascular disease, coronary heart disease and cancer by 13, 27 and 21%, respectively. Importantly, the team also observed that excess sedentary time tends to make it harder to regain physical strength and function. These study authors warn that: “There [is] a linear relationship between greater amounts of sedentary time and mortality risk.” Among men, sitting for long periods increases heart failure risk in men – even for those who exercise regularly. Deborah Rohm Young, from Kaiser Permanante (California, USA), and colleagues followed a racially diverse group of 84,170 men, ages 45 to 69 years, without heart failure. Exercise levels were calculated in METs (metabolic equivalent of task), a measure of the body’s energy use. Sedentary levels were measured in hours. After an average of nearly eight years of follow-up, researchers found that those men with low levels of physical activity were 52% more likely to develop heart failure than men with high physical activity levels, even after adjusting for differences in sedentary time. Further, outside of work, men who spent five or more hours a day sitting were 34% more likely to develop heart failure than men who spent no more than two hours a day sitting, regardless of how much they exercised. The team also reveraled that heart failure risk more than doubled in men who sat for at least five hours a day and got little exercise, as compared to men who were very physically active and sat for two hours or less a day. These authors urge that: “Both physical activity and sedentary time may be appropriate intervention targets for preventing [heart failure].”

Too much sedentary time is linked to major disability after age 60. Dorothy Dunlop, from Northwestern University (Illinois, USA), and colleagues analyzed data collected from 2,286 adults, ages 60 years and older, enrolled in the National Health and Nutrition Examination Survey. It compared people in similar health with the same amount of moderate vigorous activity, with the participants wearing accelerometers from 2002 to 2005 to measure their sedentary time and moderate vigorous physical activity. The data revealed that being sedentary was almost as strong a risk factor for disability as lack of moderate vigorous activity – that is, that sedentary behavior is correlated to increased disability regardless of the amount of moderate exercise.” Submitting that: “data show a strong relationship between greater time spent in sedentary behavior and the presence of [activities of daily living] disability, independent of time spent in moderate or vigorous activity,” the study authors urge for “programs encouraging older adults to decrease sedentary behavior regardless of their engagement in moderate or vigorous activity.” [Dorothy Dunlop. “Sedentary Time in U.S. Older Adults Associated With Disability in Activities of Daily Living Independent of Physical Activity.” Journal of Physical Activity & Health, 19 Feb. 2014.]

VIEW OUR 12 Reasons to engage in physical activity