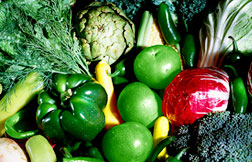 Longer telomeres linked to eating less fat, more fruit and vegetables Tuesday, January 1, 2013. A decrease in telomere length, which has been linked with age-related diseases including coronary heart disease, heart failure, hypertension, diabetes and some forms of cancer, has been found in a recent study to be associated with a reduced intake of vegetables in women and fruit in men. Men also experienced a decrease in average white blood cell telomere length in association with a greater intake of fat, particularly butter. The study was reported in the December, 2012 issue of the European Journal of Clinical Nutrition. Telomeres are bits of DNA at the ends of chromosomes that shorten with cellular aging. Telomere length has been suggested as a marker for biological aging, chronic disease risk and premature mortality. For the current study, researchers in Helsinki, Finland measured leukocyte (white blood cell) telomere length in 1,942 men and women enrolled in the Helsinki Birth Cohort Study of subjects born between 1934 and 1944 at Helsinki University Central Hospital. Self-administered dietary questionnaire responses were analyzed for the intake of fats, fruits and vegetables. Higher total fat intake as well as saturated fat was associated with shorter telomeres in men, but not women, however, monounsaturated and polyunsaturated fats were not associated with telomere length in either gender. Consuming more butter was associated with shorter telomere length among men. Women who ate more vegetables and men who consumed more fruit had longer telomeres. Further analysis found a protective effect for a higher intake of vegetables only among overweight or obese women. The authors remark that the increase in inflammation and oxidative stress associated with increase saturated fat intake could explain the adverse effect on telomere length observed in this study. However, fruit and vegetables are rich in antioxidants, which could help protect telomeres. “Compared with other studies on diet and leukocyte telomere length, our sample was one of the largest and the subjects fully represented the general population,” the authors write. “More studies are needed to replicate the results.”

Posted in Plants and Greens, wellness