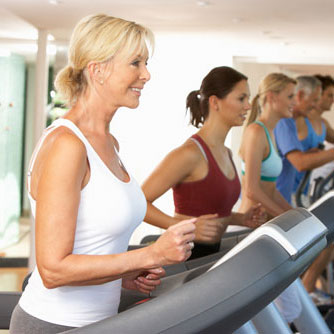 Physically Active – image from Shutterstock
Previous studies have linked a lack of exercise with declines in thinking and memory with aging. Carrington R. Wendell, from the National Institute on Aging (Maryland, USA), and colleagues studied 1,400 men and women, ages 19 to 94 years, who were asked to walk, jog or run on a treadmill until they were out of breath. A machine measured the amount of oxygen participants breathed in and carbon dioxide breathed out, to yield each subject’s VO2 max – the maximal amount of oxygen used by the lungs during one minute of strenuous exercise. The researchers followed each person for an average of seven years after the treadmill test. All participants took a memory test and followed up with the study team once, with fewer than half making a second visit to complete additional cognitive tests. By mapping participants’ physical fitness against the number of errors they made on a range of cognitive tests over time, the team found that 80-year-olds who were at one point approximately twice as fit as their peers made about 25% fewer errors on a View news source…
Carrington R. Wendell, John Gunstad, Shari R. Waldstein, Jeanette G. Wright, Luigi Ferrucci, Alan B. Zonderman.” Cardiorespiratory Fitness and Accelerated Cognitive Decline With Aging.” J Gerontol A Biol Sci Med Sci., November 5, 2013.
Posted in Fitness